We Worked With Teens In UP. This Is The Change We Saw..

India has the world’s youngest population. What does that mean? It means that, as of 2020, India has one of the largest (if not the largest) adolescent population groups in the world. Every third person in an Indian city is a youth, with the total youth population being 454 million (as of 2021).

So what does this mean? It means that when we talk about making a gender-equal future for India, whose future are we talking about? It means that we need to start thinking about young people and their future.

With that in mind, in 2016, Breakthrough started it’s ‘Adolescent Empowerment Program’ (AEP) in Uttar Pradesh, which was supported by Ikea Foundation. It ran till 2021 in 6 districts: Lucknow, Ghazipur, Jaunpur, Gorakhpur, Maharajganj, and Siddharth Nagar. But what was AEP? And in a country where adolescents and young people make up such a critical part of the citizenry (and in one of it’s most populous states), what impact did it have?

Here’s what we wanted to do: We wanted to empower approximately 150,000 adolescents’ girls and boys aged 11-19 years to be able to do one important thing: ‘demand and access gender equity in health and education in their homes and community for themselves and others.’

How? We addressed four things through the program:

And did this across three layers of society: 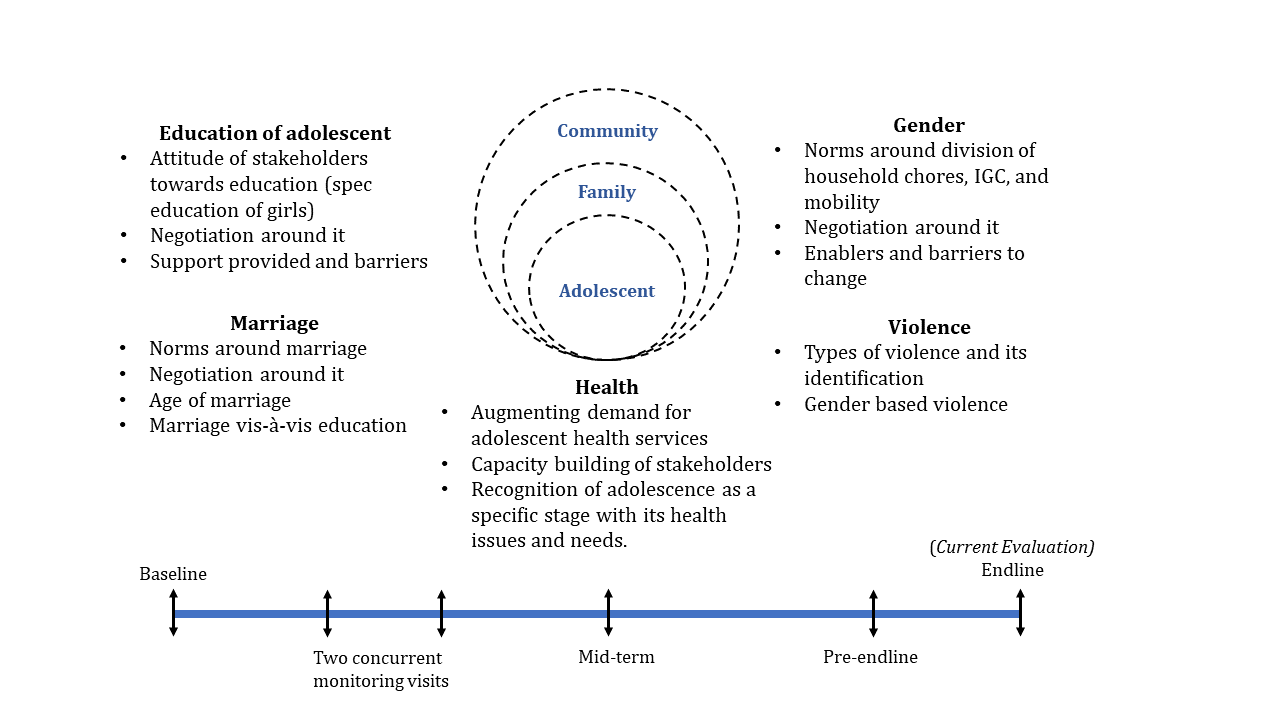 For the last 5 years, we’ve talked to children in schools, conducted gender sensitisation training programmes, conducted theatres and fairs at community and school levels, held sessions with parents and teachers alike. And now 5 years later, we have found that the community has changed.

Let’s have a look at some of the changes.

In India, marriage remains a traditional topic and especially where young girls are concerned, an inevitability. Women and girls find themselves forced to drop out of schools and colleges to be married off against their wills. India has one-third of the world’s child brides, a devastating number.

Crisis situations, like COVID 19, do not help. During the lockdown, the government’s various anti-child marriage programmes were disrupted. And research has shown that a mere one-year delay in these measures, not only in India—compounded by the economic downturn—could result in 13 million more child marriages over the next decade (2020-2030) across the globe.

But, here’s the good news. After our intervention, we found that the age of marriage for girls increased by almost 2 years (1 year 11 months, 15 days) between the baseline and endline of our work.

While it may not seem like much, this is a much needed change and hope for better things ahead. The longer girls can stay at school, the longer they gain the agency to make their own decisions for their path in life, instead of being married off early against their wishes.

Health matters, such as menstrual hygiene, remain taboo topics and access and knowledge about menstrual hygiene remains critical. During COVID19 and the lockdown, access to menstrual hygiene products was neglected. Especially during the initial phase of the nationwide lockdown, sanitary napkins were not considered in the list of essential items and there was a severe disruption in their production. Also, due to disruption in supply and restricted mobility, pregnant women and lactating mothers are at an increased risk in this current pandemic.

We found that after our intervention, adolescent girls visiting a health facility increased by 17% and adolescents of all age groups said that health services had improved in their areas!

School closure due to the COVID-19 pandemic has led to a complete disconnect from education for the vast majority of children or inadequate alternatives like community-based classes or poor alternatives in the form of online education, including mobile phone-based learning. Evidence from various studies suggests that short-term disruptions in schooling often lead to permanent dropouts.

We found that after our intervention, adolescent drop out rates from school had decreased by 6% between baseline and endline, despite the impact of Covid-19. 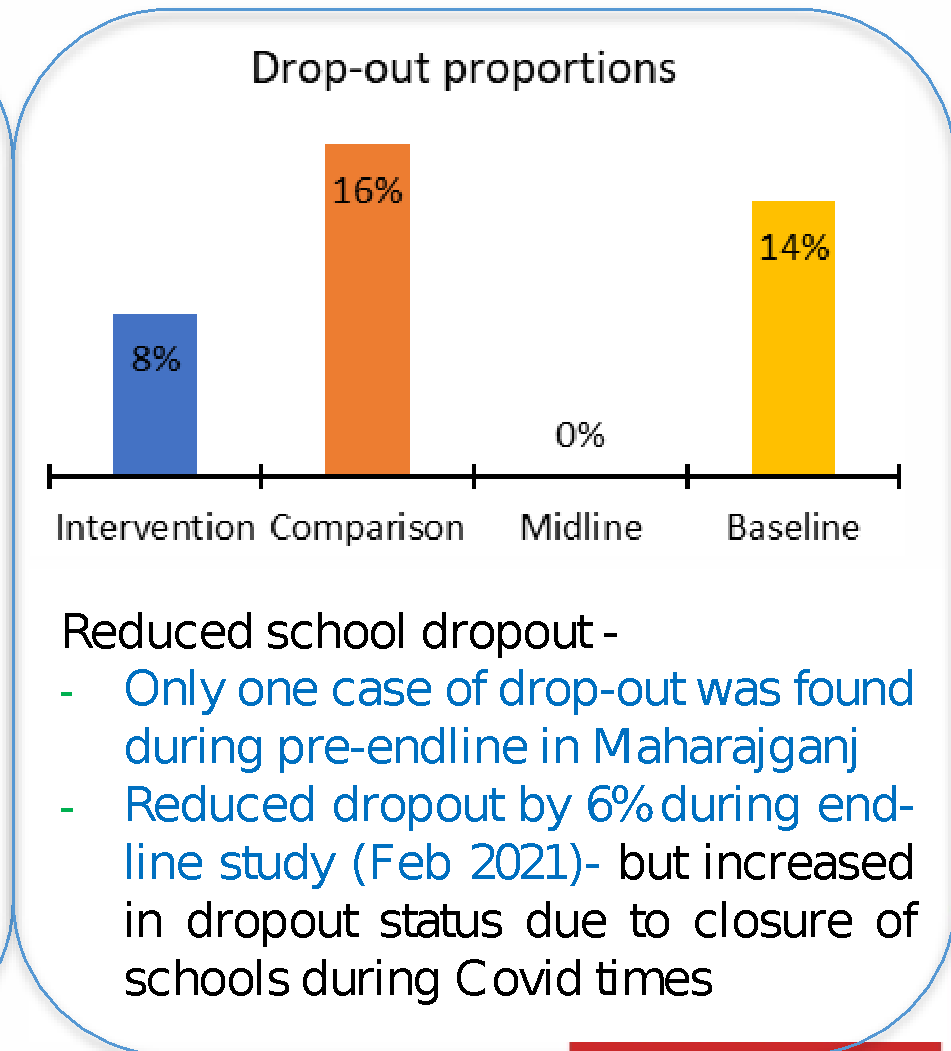 With the advent of COVID and the subsequent lockdown, reports of violence rising were already doing the rounds. The number of domestic violence reports, as reported by the National Commission for Women, rose substantially in 2020 as compared to the previous year. This keeping in mind that even speaking out about violence against women or domestic violence remains difficult or taboo for many women. The pandemic is said to cause a one-third reduction in progress towards ending gender-based violence by 2030.

In our intervention areas, we found a substantial improvement in how violence, specifically violence against women, is being perceived. 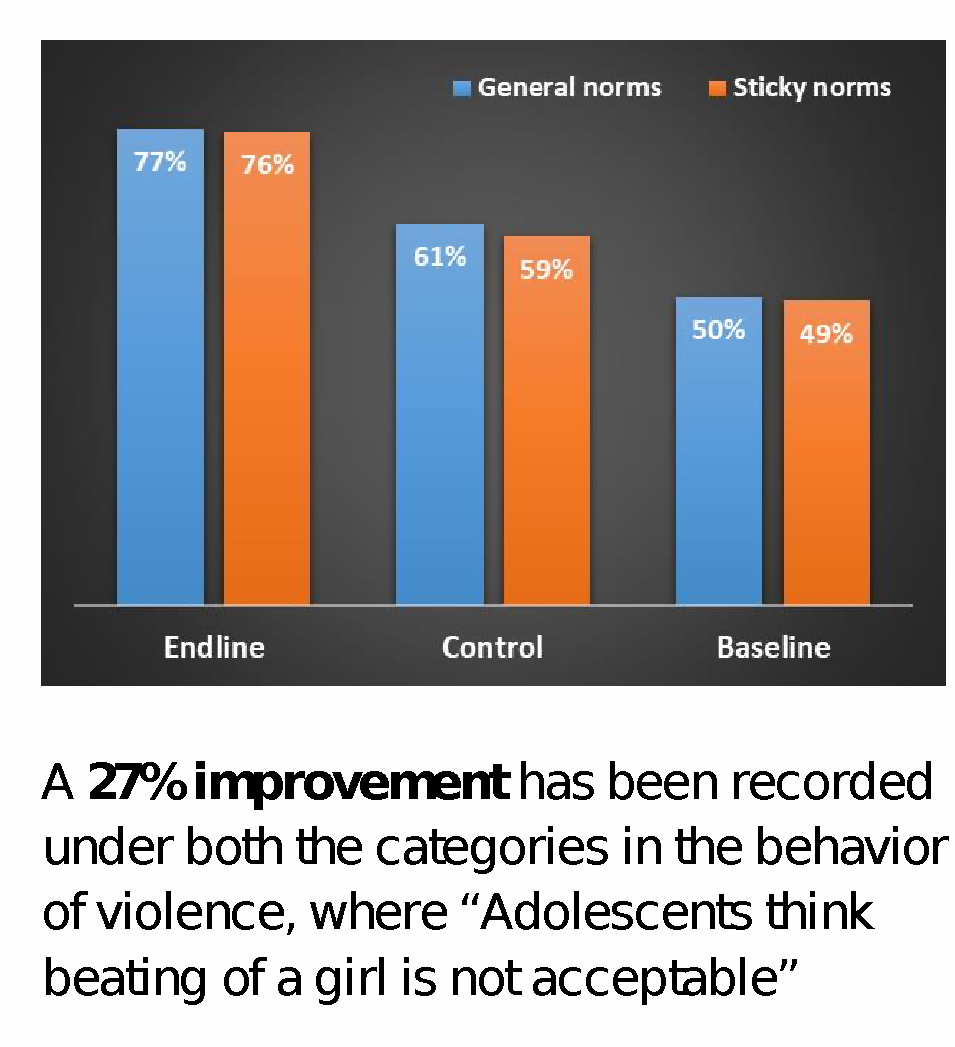 We found an increased reporting of violence, both physical and otherwise. Here is what we found:

In our intervention areas we found that, during the baseline, 36% of people disagreed with the statement, “Boys don’t need to help with household chores.” By endline, this has now improved considerably, up to 76%!

We also found that while only 18% adolescents disagreed with the statement that “Girls must do household chores because she needs to learn how to before going to live with her in-laws”, this figure improved to 28% during the endline stage in our areas of intervention.

Change is possible, change will happen and this is proof. And more importantly, long term change needs the shifting of norms at an individual, community and societal level and our hope is that working with adolescents, the embodiment of India’s future, is the beginning of it!

This is just a glimpse at the changes we found. For a full look, take a look at our full report (put together with NRMC) here!