Women Placed As Second-Class Citizens In The Indian Kinship System.

There are certain revelations that greet one and awaken one at odd times. Some last for seconds and some may last for decades. Then there are those which are inherently inseparable from some and they seem to become one with your first breath and your last breath. They start resembling lines present within the palms of several hands and those that run along the wrinkled temple.

A woman, one of many beings, of many colours, many paradigms of faith and many socio-economic hues is subject to such unceasing revelations. The revelation of impurity associated with menstruation across several cultures, the revelation of compromised ingestions of certain morsels, the revelation of matrimonial submission, the revelation of motherhood infused with the patriarchal realms of morality and the revelation of not being herself enough, ever. The intersectionality of caste and gender is what deeply motivates and determines our understanding of disparities a woman is subjected to in India. One of the most significant themes in the Indian feminist social science has been that of making women ‘visible’.

These revelations constitute a universal phenomenon – the explicit devaluation of women. As Sherry Ortner puts it, women were envisioned to be a part of an abstract spectrum constituting two polar extremes – Nature and Culture, wherein they were seen closer to the domain of nature as it was perceived that they create naturally from within their own being, whereas man was supposed to be free or forced to create artificially in a fashion that allowed culture to sustain and flourish.

Thus, the man assumed a role closer to the domain of culture. A woman’s direct involvement with the domestic circle, the reproduction of life and the lactation process of infancy didn’t allow her to transcend through the scope of nature. Her body seemed to doom her to mere reproductive functions and she was looked upon as the primary agent of socialisation (her socialising functions alone could not qualify as a representative of culture).

The intersectionality of caste and gender is what deeply motivates and determines our understanding of disparities a woman is subjected to in India.

On the other hand, a man was looked upon as the inheritor of the virtues of cultural reasoning. It was him who had the primary right to seek religion, rituals, politics, the realm of spiritual and social synthesis. It was him who had the accessibility to higher streams of consciousness. These binaries influenced the stratification of gender roles in a universal fashion and a woman conditioned into the nearly universal unquestioning acceptance of these irrational binaries led to the reinforcement of her own devaluation.

Most of the heterosexual narratives of intercourse become one of many common sites for this recurrent devaluation. In medieval Europe for instance, it reeked of agricultural symbolism. The male peasant ploughed a female field of crops and would sow seeds to harvest crops that symbolically represented children. Thus, the sexuality of a woman in this sense became more vulnerable as the field was perceived as a site that could be violated or exploited easily.

This factor is also primarily responsible for the occurrence of religion and caste-based honour killings in many parts of India. A woman’s honour and dignity which is deeply based on the principle of chastity translates into the realms of collective moral virtues of the family she belongs to. If certain gender roles are found not to be in consonance with the ritualistic doctrine of one’s caste, both men and women are subjected to several degrees of atrocities and brutalities. These criminal acts remain unreported mostly as the ritual conscience supersedes the tendency of reasoning.

On the other hand, a man was looked upon as the inheritor of the virtues of cultural reasoning.

In other instances, the family members devotedly engage in the exploitation of labour and participation exhibited by women that are possessed by the docile state of existence. The patrilineal system ensures that an absolute appropriation of both women’s labour and progeny is consistent. This tendency eventually leads to the dismissal of their contribution to production.

We must acknowledge that women are active and conscious beings, well determined by kinship structures as they internalise its tendencies. This act of internalisation takes the form of certain patriarchal bargains which seek protection in exchange for submissiveness and propriety and influences the traditional modesty markers such as the act of veiling which symbolises a woman’s need to be worthy of protection.

The deprivation she experiences as a young bride is dissolved by the control and authority she will assume over her own docile daughter-in-law. This unremitting cycle configures the fundamental truth of patriarchy. This anticipation of seeking and attaining power, or perhaps the façade and the illusion of authority is what fuels the conditional experiences of disparities and opportunities. It encourages a thorough internalisation of this form of patriarchy by the women themselves.

The gendered hierarchical division of labour and of social space restricts, bounds, incarcerates feminine activity and expression and projects women as beings that are liabilities. This notion is further extended and legitimised by the myths and mythologies of a particular society which navigates norms and certain behavioural patterns, cascading into the depths of our being. A self-conscious effort must be made to unravel women’s voices within the patriarchal discourse and to bear a witness to their contemporary productivity and to ensure that their labour is acknowledged and rewarded. The oppressive gendered systems will cease to exist only when its connotations are realised structurally, influencing the very narrative of the representation of a woman. 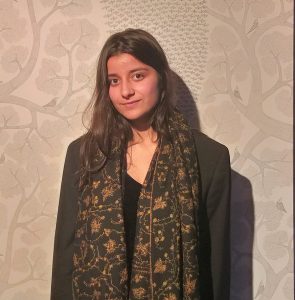 Vrnda Dhar (She/Her)
Vrnda is currently in her final undergraduate year, pursuing honours in Sociology, at Lady Shri Ram College for Women, Delhi University. She's interested in the study of Social Anthropology and wishes to contribute to the realm of Gender, and Conflict and Displacement studies. She is a volunteer with Breakthrough.
Subscribe.
Receive a bi-monthly update on events, campaigns & other news that interests you.
Categories.
Contribute.Write for us, become a contributor to the Breakthrough blog.
Connect.