A rape threat online: Just a few typed words from a stranger?.

I created a space called Shontu in order to highlight incidents of online harassment and fight back. I had lost patience with the increasing number of online harassment instances that were being shared with me on my abuse prevention campaign page. After making the mistake of opening various private message folders (a standard feature across all major social networking platforms) and discovering lewd texts, unsolicited genitalia photos, it became clear that online sexual harassment was and is rampant and largely an unreported issue.

I love sharing photographs on my social media accounts. With great photos come not-so-great comments from strangers, and some of them steal the cake. From “frndseep” seekers to the online moral police who take it upon themselves to question everything they cannot process, the levels of ridiculousness only keeps increasing. And then, there are the more serious comments, those involving rape threats.

I received a graphic rape threat. This (screenshot) is a comment posted by someone who claims to work with a multinational company and lives in the same state as I do. His profile, ironically, contains written lines of love towards his partner and photographs with her. I wonder how she would respond if shown the utter filth her partner sent me.

As an activist against sexual assault (online and offline) I am no stranger to online tussles and differences of opinion. I’d say I was pretty thick-skinned before the rape threat yanked my cocoon of comfort away from me.

Some people came forward online, making use of the recently added angry react emoticons. Nobody did much though, not even my then boyfriend, who happened to be a lawyer. In typical fashion, people talked and made tall promises, but “nobody” took that all-important step of being there for me. I was shaken. Rape threats are not okay, they do affect a person. Being a public figure who is easily accessible and approachable, made the whole situation worse for me.

Post-threat, something strange happened. A social media platform deleted a status update I shared because it went against their community standards! Apparently, the actual rape threat is something their standards are okay with.

Enraged, vulnerable, demotivated, is how all of this made me feel. At exceptionally vulnerable moments, I question as to whether I did in fact “bring it on” i.e. encourage the abuse. Of course, these are fleeting moments of despondency but they do occur if one receives empty promises from the system of justice, and the community standards of leading social media platforms seem bent on re-victimising the victim instead of supporting them.

In July 2016, I was tagged in a message which highlighted an absolutely vile rape threat issued to a young female and her 14-year old brother by a 24-year old male. With the unusually swift cooperation of the Kolkata Police, action was taken and I posted an update, celebrating the arrest of the perpetrator. Guess what the social media platform did? They banned me for one month as my post against rape went against their questionable community standards.

The battle will rage on, between activists and unsafe social media platforms, between regular internet users and trolls, between women and stalkers, vulnerable communities and people who target them. A little more sensitivity and peer support would do a world of good to someone who has received a rape threat. It is not just about a few typed words from a stranger, it is about knowing that someone who doesn’t even know you, is willing to violate you so brutally. Nothing on earth can ever justify that breach of personal space.

For those who need help or support, the Shontu movement is here to help – www.facebook.com/helloshontu 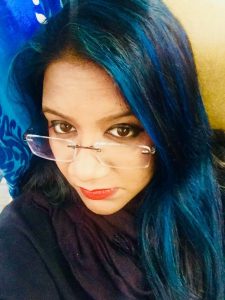 Pranaadhika Sinha Devburman
Pranaadhika Sinha Devburman is the Founder of One Million against Abuse, and Shontu: United against Online Harassment. She runs a social enterprise called Bling for Change, geared towards economic empowerment of vulnerable communities.
Subscribe.
Receive a bi-monthly update on events, campaigns & other news that interests you.
Categories.
Contribute.Write for us, become a contributor to the Breakthrough blog.
Connect.