Uma Devi And Her Daughters.

‘I never regretted having only daughters….’

With tears in her eyes, Uma Devi embraced her daughter Nancy when she gave her a ‘Thank You’ card for supporting her studies. Uma Devi said, ‘There was a time after my husband’s death when my daughters and I were on the brink of starvation. For six days we had nothing to eat. Finally, I had to get grains from a neighbour’s field, grind them to prepare flour and then I was able to cook a meal for my daughters. I have single-handedly raised my daughters and ensured their education. But I never regretted having only daughters. They are no less than sons for me’.

From being on the brink of starvation, Uma Devi has raised her girls with such dignity and dauntless spirit that these same qualities have today been internalized by her daughters. Realizing the hard work and sacrifices of their mother, the girls are showing great sincerity and commitment towards their studies and career.

Ask the girls about their mother’s struggle and they get emotionally overwhelmed. However, they have turned this realization into their strength; they are resolute that they will study sincerely and become self-dependent.

The Kishori Mela organized by Breakthrough last year on the importance of education was emotional for this family. Uma Devi’s determination to support education of her three daughters became firmer. Her daughters also decided that they would not only study for themselves, but also provide free educational support to other younger children of their village.

13-year-old Nancy and 15-year-old Manasi are members of the Taron Ki Toli (TKT) programme (a curriculum based on life skills from a gender perspective) of Breakthrough. They return home and share their what they learned with their mother and 18-year-old elder sister, Shivani. Shivani is pursuing her graduation, Manasi studies in class 11 and Nancy is in class 9. The three sisters were greatly inspired by the TKT lesson ‘Sadda Haq’ through which they learned that all children have the right to education. They decided to ensure this right for other children, as well by providing free education for them. Presently, about 15 children of the village come to their house to study daily.

Uma Devi works as a cook in a government school and when asked ’Have you ever faced adverse comments for not having a son?’ Uma Devi replies, ‘I have raised my daughters through my hard work, and so comments of others have never worried me. My daughters are my pride. I have full trust in them and their potential.’

‘God helps those who help themselves’. I had often heard this proverb. Uma Devi’s story is a living example of this. God has been kind to Uma Devi. Her financial position improved since she won a case related to the ownership of her late husband’s property. This year, for the first time, her elder daughters celebrated the birthday of their youngest daughter using their pocket money. While cutting the cake, the family’s eyes were moist as the memory of those dark days of starvation came flooding back. Uma Devi embraced her daughters and, with eyes glistening with pride and hope, they silently vowed to never let the memory of those unfortunate days spoil their present happiness and their optimism towards life.

(The blog has been written by Supriya on the basis of the story of Uma Devi and her daughters shared by Mala. Both Supriya and Mala are part of Breakthrough, UP team working for the Adolescent Empowerment Project) 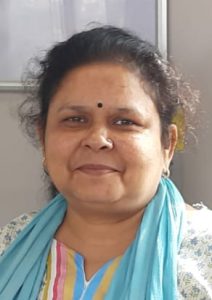