Women Of Chimchechuwadi: Untold Stories of A Collective.

Chimchechuwadi is a remote settlement in Shinoli village in Ambegaon Taluka , Pune district of Maharashtra. Most of the families in Chimchechuwadi belong to tribal communities. The community, which is dependent upon agriculture and daily wage activities for a living, has only got a primary school and a community center for itself. There are no healthcare facilities or frequent transport services in the village. However, the settlement has an abundance of natural resources like grazing lands, fields, ponds and hills on which the community is highly dependent upon. Similar to many other tribal communities across the country, they also have their own cultural practices including indegenous gods and goddesses. Even though the community has an inclination towards the larger cultural essence of Maharashtra, they still follow their own traditions in different ways.

It was an academic engagement that drove us to visit Chimchechuwadi. We had been placed in the Integrated Tribal Development Project, Ghodegaon, as a part of our community engagement programme, in August 2019. Among the various projects in the organisation that works with tribal communities, we found the implementation of the Forest Rights as a highly important and engaging one, as it addresses the larger structural dimensions of the integral rights of the tribal communities gave us opportunity to engage with various settlements including Chimchechuwadi.

The Scheduled Tribes (ST) and Other Traditional Forest Dwellers (OTFD) (Recognition of Forest Rights) Act, 2006 is considered as the landmark legislation which seeks to reflect upon the historic injustice that has been meted out to tribal people for a long period of time. It focuses on restoring the rights of the forest dwellers over the lands that they themselves have traditionally cultivated or inhabited before 13th December, 2005. These rights ensure the tribal communities the right to access forest land which they had been engaging with for a long time, in terms of livelihood, food and other aspects of their daily living.

Basically, there are different types of rights that can be claimed under this Act:

However, through our interactions with the community members, we realised that the implementation of Forest Rights is not an easy task, as it has certain complex implications, including the involvement of various stakeholders. The long procedures, time-consuming activities, economic investment, interference of police and bureaucracy (to name a few) prevent communities from accessing their rights. The claims over forest rights are not easy either. It is a long procedure which demands a collective effort from the entire village community in terms of mapping, identifying, meeting, documenting and so on. So the implementation rate of the FRA for this reason is not as good as many other regions. Still there are different villages starting to claim their resources, but we could see even though it demands an inclusive participatory framework, it is still highly exclusive in nature.

Unfortunately, all these processes are led and implemented by the men in the communities. Women rarely have the voice to engage in such exercises. Every village, which consists of tribal settlements, has its own Forest Rights Committees which mostly consist of the men in the villages. However, considering how much women have to negotiate in almost all spheres of a patriarchal society, this was an expected scenario but requires reflection.

Before visiting Chimchechuwadi, we also visited around ten villages in three different talukas of the region – Ambegaon, Junnar and Khed of Pune district, to understand the broader cultural location in terms of implementing the FRA. Every village was a different experience in terms of gender relations. In almost all the villages, we were received by men. Their voices were the ones which dominated even in the meetings that were organized for women.

The women were hesitant to talk to us. I was travelling with one of my batch mates from Assam who was engaged with a project of the Self Help Groups in tribal communities. Noticing the evident gender politics, it was my friend who started almost all the conversations. She introduced the project related to the Self Help Groups, before also talking about the Forest Rights, as it was considered to be something to do with only the men in the villages.

Later, the women engaged themselves in the communities through different activities based on themes like Resources and Rights.  But this too was dominated by men. I remember us, along with the women in the community, negotiating with one of the male representatives when he did not allow the women to map the community resources. Finally, when the women got the opportunity and space for mapping, he still did not give up and drew a map nearby, claiming that women cannot identify and articulate the common resources.  To be honest, the mapping done by the women came out better.

While discussing Forest Rights, the men become insecure, as they feel that it is their business and not the women’s. When the women, who were engaging with natural resources, prepared their daily work profile, one of the male members publicly claimed that they did not know their work profiles and that he could help them out.

These were some of the many instances which structurally portrayed that it is only the men who are capable of speaking when it comes to the rights of resources and property. Through various narratives, the men in the village literally claimed that women were supposed to be satisfied with the Self Help Group activities only.

On the other side, women are highly interested in engaging with these activities. The women group becomes especially active when the discussions happen regarding resources and rights. They indeed want to assert their voices and claim their rights, which is altogether a herculean task in a patriarchal society. Unlike other villages, Chimchechuwadi was articulate about this. That is the reason why Chimchechuwadi collectivised their women to claim their rights.

The initial discussions revealed an environment where the women were neither informed nor seemed to be interested in Forest Rights. However, they gradually appeared curious to discover more about it. Later, they engaged with various activities which helped in building a nature of collectivization amongst them which also helped us to have a better understanding about all these. 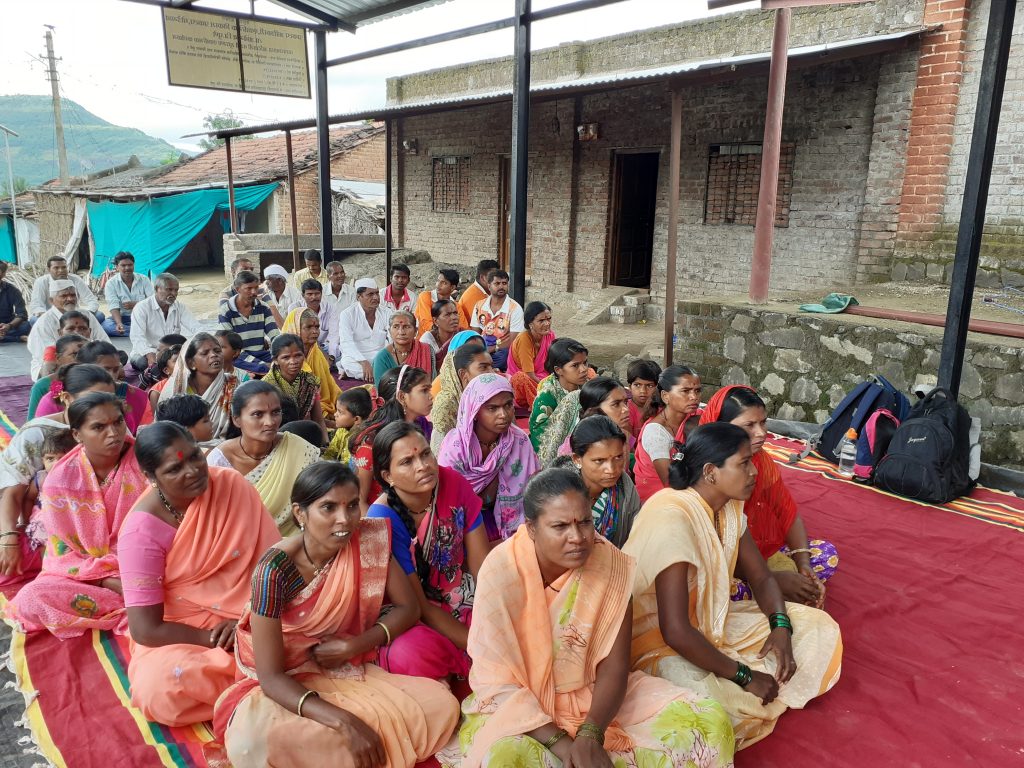 It was equally engaging and enriching for all of us when we were all mapping their resources, documenting the history, inquiring about the ontology and so on. It was very interesting to observe how they articulated each resource related to their daily lives. They documented their natural resources, community spaces and cultural spaces. During the continuous interactions, they gradually discussed among themselves their rights in the resources of their village.

These exercises helped them to articulate about their resources in their village as they broke their boundaries to claim their Forest Rights. They all felt inspired when we had a discussion on various movements in states like Orissa, where women in the villages worked hard to claim their Forest Rights. The women in the village became highly confident about their rights. The support offered from Yogesh Khandare Sir, Tribal Inspector ITDP, Ghodegaon, also helped them to be more organised in carrying out their project.

In one of the meetings, an elder woman in the community asked a question, “See, during the verification process while claiming community forest rights, it is mostly the men who deal with everything. They consider one of the elder members of the village as the key informant about the history, mostly a man. We, elder women in the village, go grazing the cattles in the hills. We also know about resources. Why are they not including us?”. This was actually a powerful question that arose from the community and it helped women to think beyond the boundaries set for them. Here, they felt that they should come up with a movement and they named it ‘Van Adhikar Amalbajwani Abhiyan’ discussing with everyone where women are at the forefront of claiming Forest Rights .

It was an off day for them in the field. The day was chosen for the inauguration by the women themselves as they did not have to go out on market too. The ladies had been at the forefront in planning the official launch of the project. They actively took part in setting up the Samaj Mandir. They went to every household to inform them about the event. All of us were amazed when even the women from Thakarwadi attended the event. Unlike women in the community, we were curious to know what made them attend the event, themselves being a different settlement and having had to walk a long distance to reach there. They said, “We all are working in the same field. When we heard about this cause and an event happening, we thought that we should give our solidarity for the same. That is why we all came for this program”. This was surprising for all of us but not really for the women in the forefront as they had built solidarity for their cause.

The entire village was part of the event. Some of the women leaders of the team addressed the audience, that too for the first time in their lives. But the confidence that they had about what they were standing up for, made the community happy, even though there were differences of opinion from the men in the settlement. But they all could see their courage in speaking in front of the village about their rights, looking at their men from behind a microphone for the first time. They also mentioned how happy they felt. An announcement was made in public that everyone should come together, irrespective of gender, in order to claim the Community Forest Rights.

Even today, they are there in Chimchechuwadi, a bunch of excited women who assert their voices. How can we not mark their presence in history, which they together built in unity through a companionship? 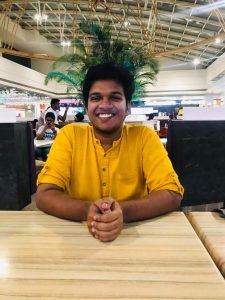 Al Ameen J
Al Ameen J is a post graduate in Social Work with a specialization in Community Organisation and Development Practice from the Tata Institute of Social Sciences Mumbai. He loves working with communities and documenting their narratives in the larger development discourse. He is also passionate about performing arts and cultural studies.
Subscribe.
Receive a bi-monthly update on events, campaigns & other news that interests you.
Categories.
Contribute.Write for us, become a contributor to the Breakthrough blog.
Connect.