Change Starts With Young People. These Are Their Stories..

With empowered young people, change is possible. Nowhere is this more visible than in the stories of the young people who Breakthrough works with in our intervention areas. These are the young people who, despite the difficult times of COVID and the lockdown, stepped forward for themselves and their communities!

Hinaz broke the cycle of violence in her home

Hinaz is a 22-year-old girl living in Bhasanda village of Mohanlalganj block of Lucknow. She belongs to a family of 6 siblings. Her elder brother lives with her maternal uncle, while her elder sister is married. At home, she has her parents, two younger sisters and a younger brother.

Until recently, it was her younger brother who was the earning member and the family was dependent on him. He often resorted to verbal and physical violence if his younger sisters did not obey him or did not do things as per his instructions. He would yell and beat them about the smallest of issues.

Hinaz has been associated with Breakthrough’s programme for a while. Gradually, she began to realize that what they were suffering was actually domestic violence. During lockdown, when Breakthrough launched the ‘’Dakhal Do Campaign’’, Hinaz realized the necessity of ending this violence. She talked to her parents, but they said she was incorrectly interpreting the quarrels between brother and sister as domestic violence. Hinaz even talked to one of the Breakthrough trainers – Shweta about the issue. Shweta took the issue up with her parents and tried to explain how this violence was adversely affecting the lives of their daughters. Hinaz also joined in at this point to say that if they did not take action against their brother, she would dial 181 to complain.

By this time, Hinaz had been selected as a Team Change Leader by Breakthrough and started getting an honorarium. She had also started taking coaching classes and teaching doll making skills to girls in her village. Thus, she started earning. Her parents felt she might actually complain to 181. They also felt more economically assured, as Hinaz had started earning. So they talked to her brother and Hinaz’s mother told her son firmly, “If you don’t mend your violent behaviour, you will have to leave the house. Don’t give any money to us, we will survive on meagre meals but [we] will not allow you to be violent towards your sisters.” Hinaz’s brother then left the house to live separately.

Now Hinaz and her sisters can live free from the violence and ill-treatment by their brother. This is them with their mother, pictured below. 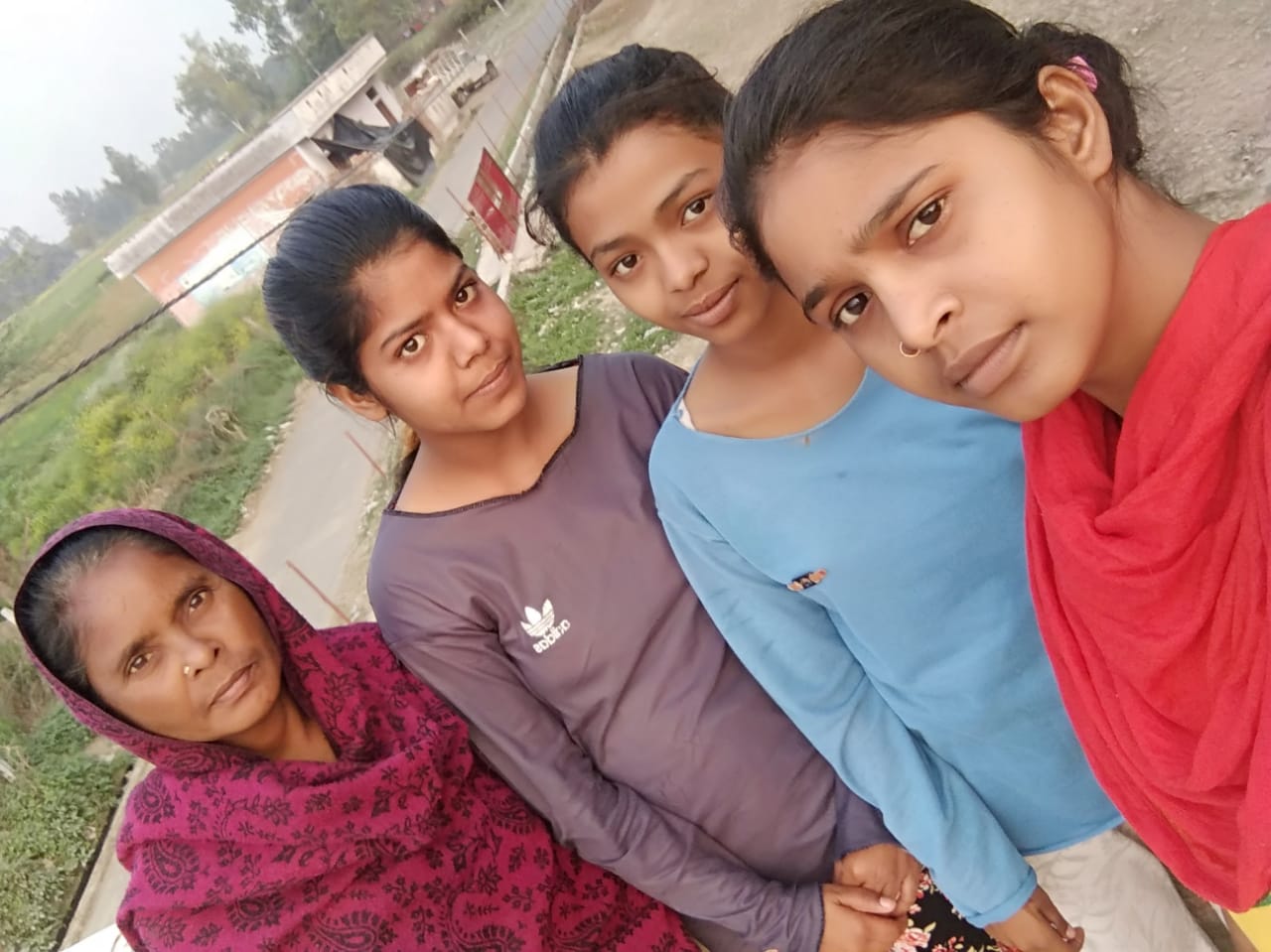 How the young people people of Haryana made a difference!

Ritu is a 26-year-old #TeamChange leader, who belongs to Kutail village, in Karnal, Haryana. As a young changemaker, she has attended issue-based and leadership training with Breakthrough.

During COVID, her classes were affected due to the non-availability of mobile phones. She saw that adolescents and young people around her were also facing similar problems. They decided to form a group called Ojas Youth Club to study in groups and talk about their issues. They later started a library for other kids and adolescents to provide a space to study and also some story books. They mobilised biographies and story books from Vritra Foundation, an organisation working in their village.

The club also had an interface meeting with a self-help group (formed by Arpna Trust Karnal), to discuss issues regarding how adolescents and young girls faced harassment in areas around wine shops. The group, along with women and other youth, collaborated with the Sarpanch to organise a rally and close the wine shop.

Ritu was also a part of the Asia Pacific Youth Activism Accelerator Session organised by UN Women, where she talked about this work!

And the stories don’t end here. Following school dropouts caused by the disruption to education due to COVID19, some of the Team Change leaders in Haryana started a library in the community; they wrote a letter to the Panchayat head, who was impressed by their initiative and agreed to their request. They conducted a survey to find out the number of adolescents who had dropped out and started a free coaching center in the village.

This idea was proposed to elders and the young leaders negotiated for a space in the village. They called up other officials who had visited their village and asked them for support with books, which they were promised. They did some publicity about this initiative in the village, as a result of which there are many young children who now come to the free coaching centre!

This library and coaching centre was formally inaugurated by the Chief Judicial Magistrate, Karnal on the 23rd of July. After watching the launch event video on social media, representatives of another well-known organization in the Karnal Arpana Trust also visited the library and donated more books. Many other responsible influencers and govt. officials also committed their support with books and finances! 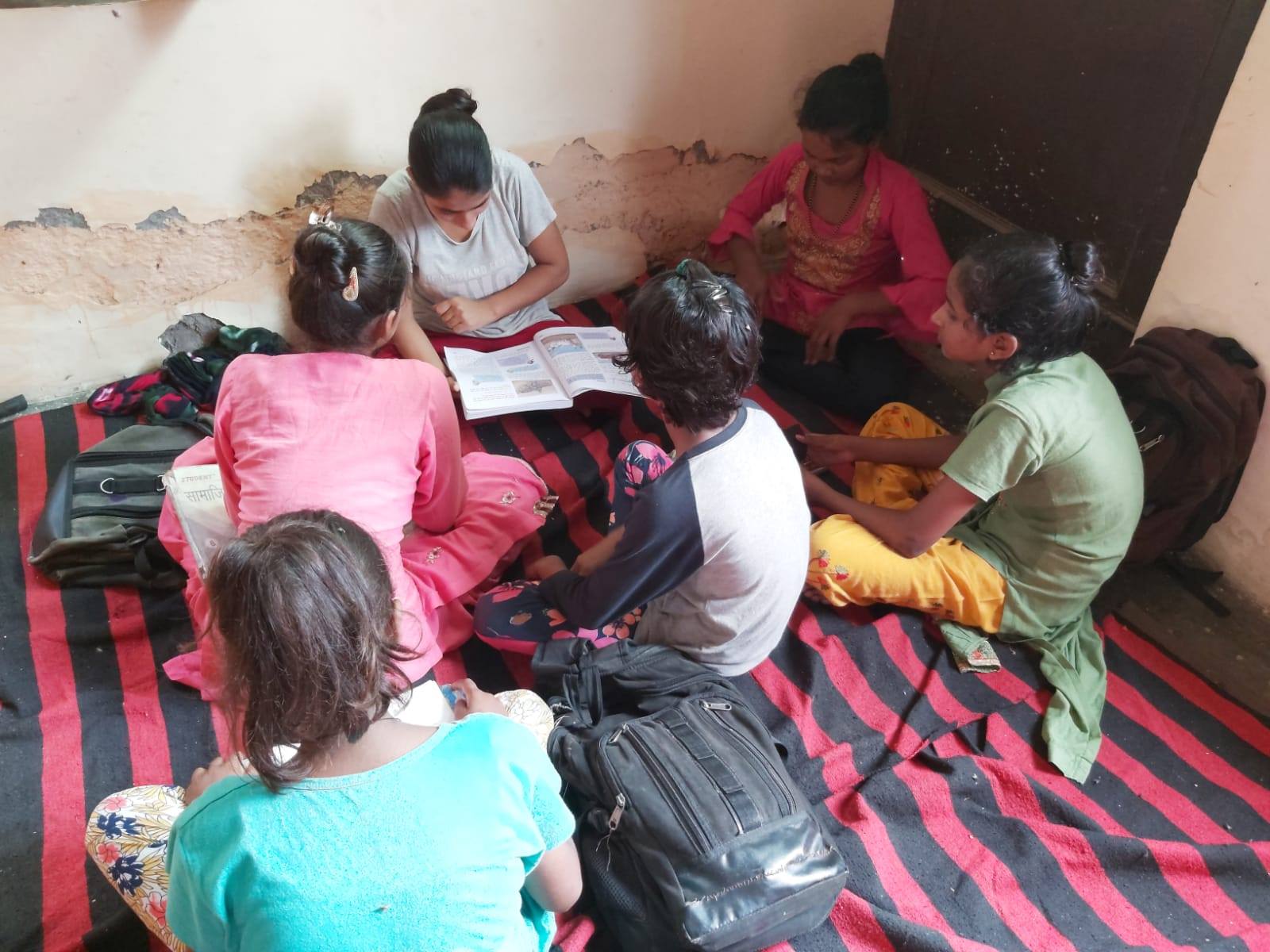 16-year-old Varsha helped about 150 people in her village get vaccinated!

“Initially, I too had several doubts and fears related to getting vaccinated. There were myths that it can lead to weakness and even cause death. Another myth was that it leads to impotency. People were afraid and did not want to get vaccinated. The elderly were especially influenced by the myths. ‘I will not get vaccinated, no matter what ’ is what a grandmother of the village said and she even told others not to get vaccinated!

Then one day, Durgesh Bhaiya from Breakthrough called and I told him my fears about vaccination. He explained to me that vaccination does not cause death. It actually provides safety from COVID and equips the body to fight the infection. Soon after, an online session was organized by Breakthrough in which Dr. Rajeev Seth and Dr. Indira Taneja talked to us about the importance of vaccination and dispelled the many myths and misconceptions associated with it.

I had a query myself: If someone is already under treatment for some other disease, should such a person get vaccinated? I was told that such a person should consult and work as per the advice of his or her doctor.

l was then convinced that vaccination does not cause harm. I decided to spread this awareness amidst my community. I started with my family. I asked my brothers about getting vaccinated. They tried to delay it and said that there was no hurry. I then spoke to my parents and tried to share the correct information related to vaccination with them. Then I collected other adolescents and youth of my village and we made posters and wrote slogans related to the need to get vaccinated. 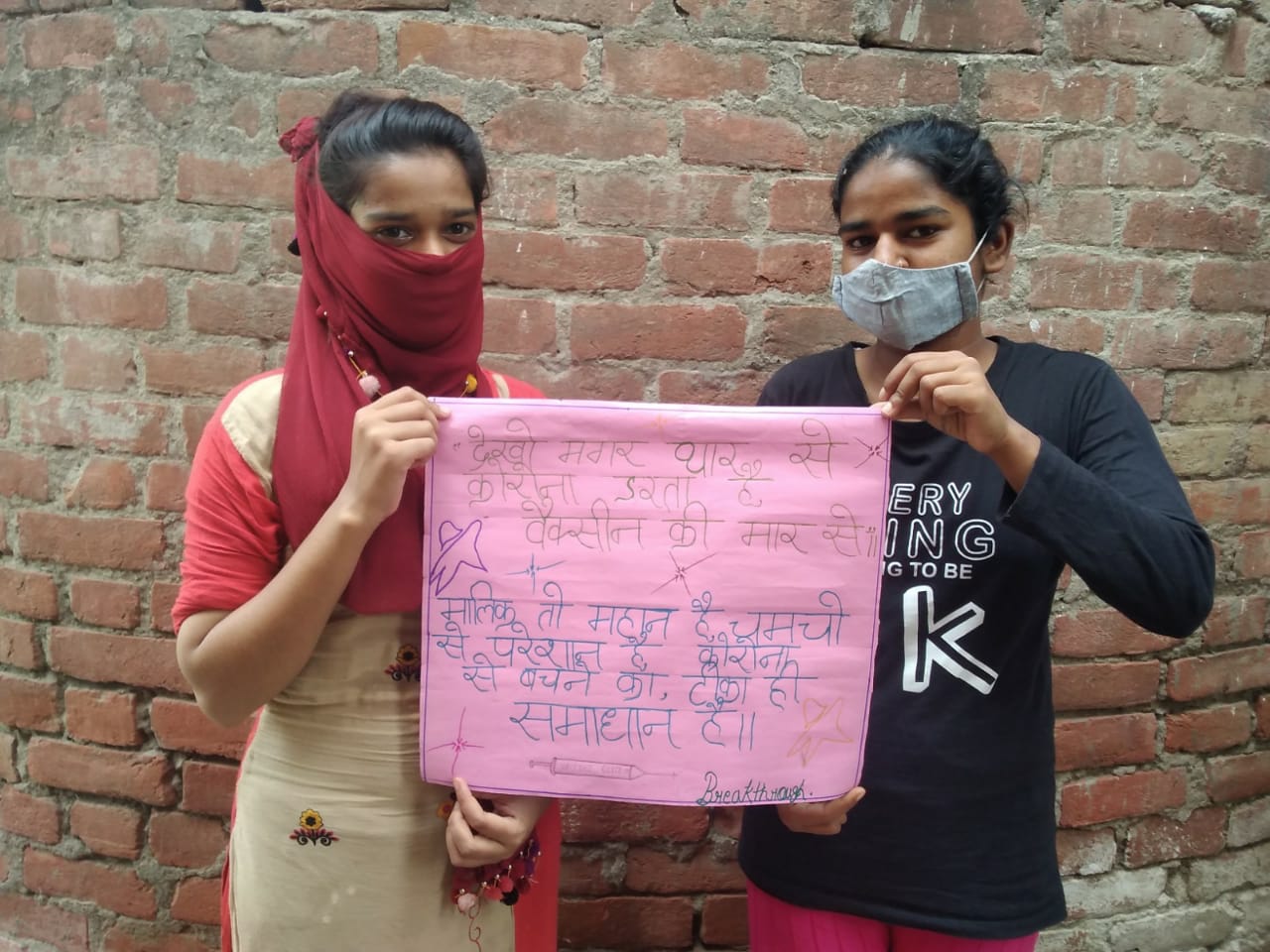 We held meetings with the women of the village and explained to them the importance of vaccination through posters and charts. We did wall writing and even called the ASHA workers (community health workers) of the village to support us in spreading awareness about vaccination!”

In fact, Varsha’s story doesn’t end there. All the effort she and her friends put in paid off, because the first people to get vaccinated were Varsha’s brothers and her sisters-in-law, Rekha and Priti. After this, a vaccination camp was held in Jagmatkheda village where Varsha’s parents also got vaccinated. In all, Varsha and her group facilitated the vaccination of about 150 people of Jagmatkheda village. People who used to be afraid of vaccinations were now grateful for the awareness spread by Varsha and her group and got themselves vaccinated. Now her group shares these messages and pictures on WhatsApp to spread awareness to other remaining people of their village, neighbouring villages and relatives!