The Effect Of Covid-19 On The Nutrition Of Children In Uttarakhand.

After years of steady growth, in the year 2017, the Food and Agriculture Organization reported that there has been an increase in global hunger since 2015. This increase has put many regions of the world at the risk of the worst food crisis since World War II. The primary cause of the estimated 50% deaths of a child falls under chronic malnutrition. This leads to the growth of the child being stunted which results in the deteriorated physical health of a child. It also impacts the child intellectually which makes escaping poverty more difficult, thus affecting the development of human capital and economy.

The first thousand days of a child’s life are of utmost importance which requires adequate nutrition from the moment of conception to the child’s second birthday. This is because if a child becomes stunted, it will have a long-lasting impact on their physical and mental health. It is stated by the World Bank that 37 countries account for 85% of the global burden of stunting and one of them is India. In India, the NFHS-4 (2015–16) reveals that 38% of the children under five are stunted (low height for age), 36% of children are underweight (low weight for age), and 18% of children are wasted (weight for height).

Definition by WHO – Malnutrition occurs due to the excessive, deficient or improper intake of a nutritious diet by a person. Malnutrition can be subdivided into sub-groups i.e., undernutrition and overweight. Undernutrition refers to the low intake of diet which causes stunting, wasting, underweight and the lack/deficiency of nutrients. Another sub-group is overweight – diet-related non-communicable obesity. The World Health Organisation (WHO) reveals that the total number of children under 5 who are wasted is 47 million, severely wasted is 14.3 million, stunted comprise 144 million and 38.3% are overweight.

A proper nutritious diet is important for the growth of human beings. The foundation for a person’s health is laid early in life. In most developing countries like India, children under 5 die due to poor nutrition. Yet, India is the world’s second-largest food producer but also has the largest number of malnourished children. For the growth of any nation, investment in human resource development is a must. The Global Hunger Index 2020 shows that India ranks 94 out of 107 countries – indicating that 14% of the country’s population is undernourished. India’s per capita income as compared to neighbouring countries like Sri Lanka, Nepal, Bangladesh, Myanmar and Pakistan is better but these neighbouring countries are ranked higher in the Global Hunger Index 2020 than India i.e., 64th, 73rd, 75th, 78th, and 88th respectively.

The first objective of the research was to examine the nutritional status among children between ages 0 to 6. The study found that the rate of malnutrition in this district is greater than the average rate in the country. According to the NFHS-4 report, 18% of children under five have low birth weight. In Nainital, approximately 1/4th i.e., 27%, of the population is malnourished. As such, the researcher’s sample size area is more dominated by malnourished children.

The third was to establish gender disparities related to the health of children between the age group of 0 to 6 years. The study found that in terms of gender disparity, boys are given more preference than girls in every aspect. The other trend indicated that the average birth weight of males was better than females and the average weight of males increased with age at a much better rate than those of females. The females are more malnourished than males children. The one positive thing revealed was that the people of the district are aware of ICDS schemes and are availing of its benefits.

Nutritional status is mainly influenced by the consumption and use of nutrients. As per the WHO, health is described as a condition of full mental and physical well-being in relation to an individual’s productivity and efficiency.

From the research, the children whose mothers have chronic energy deficiencies, the rate of malnutrition is greater. The current condition of the mother’s nutritional status depends on the state of her upbringing. Concerted steps are needed to split up the vicious cycle of malnutrition among the poor. It should be insisted that reducing child malnutrition will rely heavily on successful and sustained action for children and their mothers.

There are still very few children and mothers undergoing adequate nutritional procedures to minimize the risk of malnutrition substantially. The only long-term solution which can eradicate malnutrition is by improving the financial conditions of the poorer and weaker sections and also by providing adequate environmental and health services. The primary goal of Direct Nutrition Intervention Policies should be to reduce acute malnutrition and to target feeding programs such as ICDS, MDM, etc.

In the district of Nainital, people are aware of the intervention taken by the government i.e., ICDS, but the rate of malnutrition is high among children under five especially among girl children. People are unaware of healthy feeding habits, proper hygiene, safe drinking water, etc. The others aspects of malnutrition are also lacking such as a balanced diet and micronutrients which are hampering the health of the child. The gender disparity is also seen where the boy child is fed well as compared to the girl child. Malnutrition eradication is only possible if feeding habits among the children are improved. The infrastructure of health centres and Anganwadi centres for the child should be rebuilt properly. Anganwadi workers should look after the nutritional of children and accordingly work to improve their coverage. Counselling sessions for the mothers should be provided regarding issues related to malnutrition. 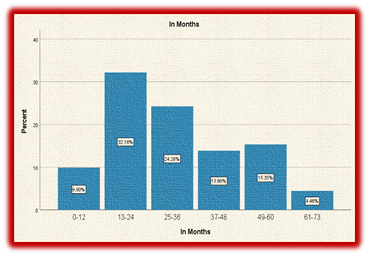 The difference between the average birth weight of males and females was alarming. 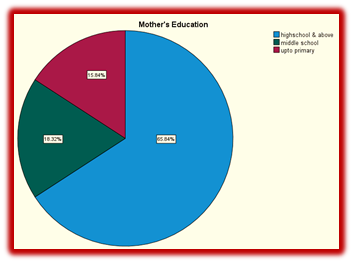 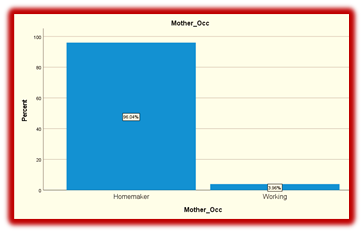 We can also see that the percentage of children with lower birth weight (17.8%) falls in the group of mothers with high school and above qualifications, which is higher than the mothers having middle school and primary level qualifications. The mother’s educational status can’t be the only indicator that determines the nutritional status of a child, other factors also play a major role.

Also, by analysing the above data, we can see that there may be the effect of covid-19 on the malnutrition of children in the age group of 3-6 years. In the first couple of years, there is a natural growth as children mostly feed on their breastmilk which provides the proper nutrition. But after the third year, the difference in the growth of body weight i.e., before and after the pandemic, is almost static. The primary reason can be the lack of a nutritious diet which is essential for the growing child.

Here we can see that the nutritional level of females is less than that of males. Girls are more malnourished than boys, which shows the gender disparity.

Samarpreet Kaur (She/Her)
"I am pursuing Masters from Tata Institute of social sciences, Hyderabad in Development Studies. My hobbies are cooking and sketching. My area of interest is gender and education". Samarpreet is an intern with Breakthrough.
Subscribe.
Receive a bi-monthly update on events, campaigns & other news that interests you.
Categories.
Contribute.Write for us, become a contributor to the Breakthrough blog.
Connect.