Why Is The Representation Of Women In The Indian Judiciary So Woeful?.

According to the data collected by United Nations Women across 39 different nations – “The presence of women police correlates positively with reporting of sexual assault, confirming that recruiting women is an important component of a gender-responsive justice system.”

The unfortunate irony and mere hypocrisy of our legal system is reflected by the fact that despite the symbol of justice being a statue of a blindfolded Lady Justice holding a balance, we have less than 12% women judges in the High Courts. According to a report published by Vidhi Legal Policy, there are 27% female judges in the lower judiciary, 10% in High Courts and less than one percent in the Supreme Court. Moreover, we have not yet seen our first female Chief Justice of India in spite of the experience, educational qualifications and capabilities of women as Judges.

The lachrymose part of the current situation is that even if some women, through their diligence and struggle overcome such obstacles and achieve great heights in the legal field, they are not looked at anything more than a “woman who accomplished great things”. A term like “Lady Judge” is not required in our vocabulary considering the fact that the term “Judge” itself is gender neutral. The underlying misogyny and mansplaining in this field manifests itself overtly and covertly.

Despite the symbol of justice being a statue of a blindfolded Lady Justice holding a balance, we have less than 12% women judges in the High Courts.

This problem trickles down to the lowest courts in our judicial system where women are not assigned important cases to judge upon or represent. It took us almost 40 years to get our first woman judge – Justice Fathima Beevi. Then another 28 years for the Supreme Court to have the first directly appointed woman judge, Justice Indu Malhotra, among other six male judges.

A major setback in women’s representation is faced due to the fact that in order to be appointed as district judge, lawyers need to have seven years of continuous legal practice and should be between 35-45 years of age. This is a disadvantage for women as many are coerced into getting married by this age. Further, the long and tedious work hours in law, combined with the “unavoidable” familial responsibilities of a woman, force many to drop out of practice and thus fail to meet the prerequisite of continuous practice to be eligible for a position as a District Judge.

The importance of women in the judiciary can be seen through the landmark judgement Vishaka v State of Rajasthan in the year 1997, which was delivered by Justice Sujata Manohar. Provisions for sexual harassment at the workplace was for the first time made actionable by law, and thus shows how women understand the plight of other women the best.

Women judges bring those lived experiences to their judicial work and experiences that tend towards a more comprehensive and empathetic outlook – one that encompasses the legal basis for judicial action and sensitivity towards the effect of those consequences on the people as well. Underrepresentation by women in the judiciary is the cause of underrepresentation of women in our society. Take another instance where Justice Ruma Pal extensively elaborated on the concept of “mental cruelty” in marriage through her judgements for Jayanchandra v Aneel Kaur.

There are 27% female judges in the lower judiciary, 10% in High Courts and less than one percent in the Supreme Court.

Women at all levels of the judiciary are critical for handling certain issues that may have very wide social and political ramifications. First, inadequate representation could aggravate biases within the courts; second, the lack of women representatives in courts give rise to questions about the courts’ legitimacy as representatives of the societies they serve; and third, the presence of women judges signals equality of opportunity for girls within the bar and an appointment process that’s fair and non-discriminatory and enables a level playing field.

In order to overcome these problems, law schools must impart legal knowledge with a feminist perspective. It should be understood that feminism does not only talk about the rights of women, but rather advocates for equality of rights irrespective of the gender or sexuality of a person. While the profession of litigation, like other professions, saw an increased entry of women since the 1990s – the current ratio of women practitioners to men is still lacking. Sexism must be tackled at multiple points – the interactions between lawyers, judges and clients is one such point where the language is colonised by patriarchy and is ostentatiously reflective of it. Previous judgments have used casteist and sexist language. Changing interpretations with changing times should be reflective of the same. 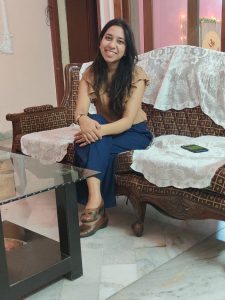 Arpita Mittal (She/Her)
Arpita Mittal is a Law Student with a strong belief system inspired by the books she reads and the movies she watches. She has a pragmatic approach towards life and feels deeply for the impoverished people in society. Arpita is a volunteer with Breakthrough.
Subscribe.
Receive a bi-monthly update on events, campaigns & other news that interests you.
Categories.
Contribute.Write for us, become a contributor to the Breakthrough blog.
Connect.