Click to get to our reframe summit page - Apply now
The Breakthrough Voice 10th January, 2020

In light of the recent events across the country, women have come out in large numbers to protest against communal violence and injustice. Over the past few weeks, various parts of the country witnessed vehement student and women-led movements, addressing the issues of sexual violence, lack of law and order, communal tension and the latest NRC (National Register of Citizens) and CAA (Citizenship Amendment Act) regulations.

In the face of fear and unrest, thousands of women have taken to the streets to demand justice and take a stand against the fracturing of democracy. Many areas across the country like New Delhi, Kolkata, Mumbai, Hyderabad, Calicut, Guwahati, Aligarh, Bangalore, Chennai and many others, are witnessing long-drawn student movements with regards to the campus violence in New Delhi, Aligarh and Assam – as a result of the protest against NRC and CAA.

On the 15th of December (Sunday), Jamia Millia Islamia, a renowned central university located in New Delhi, witnessed a horrific incident of police brutality within the campus. Following the violent incidents, Ayesha and Ladeeda, two fiery women, stood up against the batons of the police, while shouting slogans of justice and peace. Ayesha, Ladeeda and two of their friends stood up to the police and shielded their friend from an onslaught of batons until the police were forced to accept defeat and retreat.

The two hijab-clad women now represent the spirit of women and student protesters. Ranging from different posters to media interviews, they are being portrayed as strong women who oppose state oppression. Why the hijab is being specified here is because the hijab is often passed off as a symbol of women’s oppression, and here – that assumption has no place. Many images that went viral in the media from Jamia Millia Islamia had young girls wearing hijabs and leading protests with strength.

Accessing identity documents has always been an uphill battle for women. With the NRC, women will be disproportionately affected. Women from vulnerable communities will be affected even more. Many women don’t even have access to birth certificate registration and proof of residence. Women are displaced from their maternal residence after marriage and have to change their names. Women continue to be excluded from accessing property, education and identity-based documents, and thus, their status as citizens continues to be at risk.

Protests against CAA and NRC are happening across the nation with women being the face of the protests. Collectives of Muslim women protested against CAA in Moradabad, Uttar Pradesh, and demanded that the government must take back the law which discriminates against their community. Moradabad is one of the Muslim dominated districts of UP.  On 3rd Jan 2020, on occasion of Savitribai Phule’s birth anniversary, a nationwide protest against CAA-NCR and the Trans Bill 2019 was led by trans, women and queer communities. 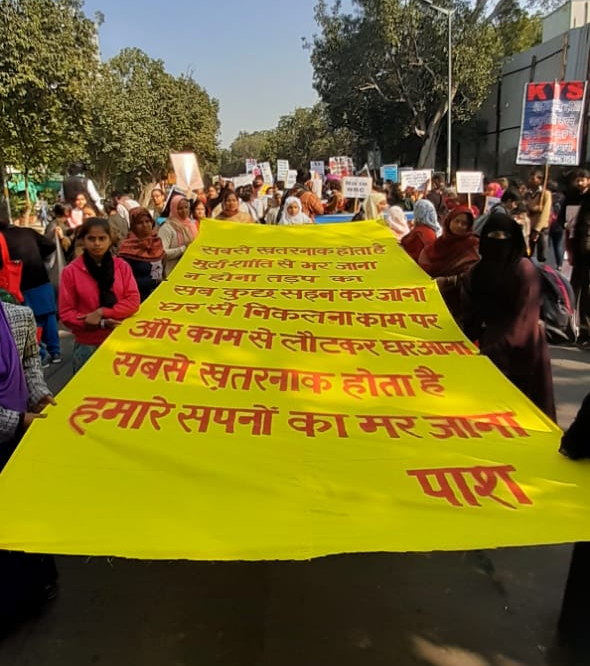 This time, women from Muslim dominated areas are taking in the lead in protesting against fascism and communal violence. Homemakers of Shaheen Bagh were on the streets for the first time to collectivise against CAA. In Delhi’s Zakir Nagar area, women banded together for a powerful silent protest. Night after night, they stood their ground and carved their presence in public places. Thousands of women descended on the streets, braving Delhi’s winter.

Images from Jamia Millia Islamia did rounds with young women leaders leading the protest. Burkha-clad women (again, written off as perpetual victims, who are now shattering that stereotype) came out on the streets to register their protest against NRC and CAA in the Hapur district of UP. Thousands of women participated in the outrage against police brutality.

Assam has been reporting incidents of mass protests across the state after the Citizenship Amendment Bill was presented in the parliament. Various women’s organisations, educationalists and hundreds of homemakers participated in the nationwide outrage against CAA. In Dibrugarh, a city in Assam, more than 5,000 women assembled to join in the protest. Women protesters in large numbers came together in August Kranti Maidan, Mumbai.

Due to the surge in communal tension, mob violence and attacks on universities, the country has witnessed many women-led protests and movements, over the past few years. At present, numerous students from various universities across the country have come together to demand a better state that propagates equality in all its forms. Many women raised the issue of their safety within the university campuses.

The current socio-political situation in India is a national emergency that needs to be dealt with, immediately. There will be many more protests and movements against the political institutions if the state fails to act on the existing issues. The uprisings by women and people from marginalised communities serve to reinforce our faith in strength-in-numbers and the democratic and egalitarian society we should have. Feisty women are gaining control of these social and political movements, thereby looking forward to bringing about a positive change within the politics of inequality and building innumerable bridges of solidarity.

Also Read: 16 Women-Led Movements You Should Know About

Orpheus is a feminist and animal lover at heart and is an ardent reader. She has always been on the lookout for social justice and equal rights. Orpheus is currently a volunteer with Breakthrough.

Almas is an avid reader and she’s always cruising for gender-based issues and how Bollywood did justice to/messed up that issue. She also identifies as a daydreamer and a biryani-lover. Almas is currently interning at Breakthrough.