“Arre didi! It indeed happened like that. Neelam was asked to bring her 3 year old brother to the adolescents’ meeting. Her family gave her permission to come only on the condition that the brother will accompany. The boy fell in a drain on the way, Neelam had to go back home, get him cleaned and then come to the meeting again!” And everyone present had a hearty laugh remembering the incident! This can actually be material for stand-up comedians but in Rambakhs Kheda near Lucknow, girls can only go out if their brothers accompany them. And these brothers can be as young as 3! All the assembled had a hearty laugh at the ridiculousness of the proposition, that a young child of 5 or so would protect the much older sister. But, so far that it helped them get out of their homes, they were ready to bring the young brother along. 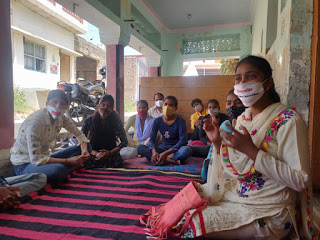 “How was the lockdown?” Meena jumped to say how badly they fared, with all family members in the same room for 24 hours and said, “How would you like staying throttled all the time? Talking in whispers? Making sure you are invisible in a 10 by 12 room with three other siblings?” Although she lead the older adolescents’ group in her village in making masks and distributing (as the local medicine shops were selling masks for Rs 120/- each) her own life was really difficult at home. Her elder brother was abusive and would beat her black and blue every once in a while and even her parents were scared to intervene.

She really worked around the issue of domestic violence in her home after getting engaged with Breakthrough’s work in the village with older adolescents. She got to know about the law and the helpline numbers. Her peer group members and the field worker of the organisation also were supportive. In December 2020, when her brother beat her up again, she decided she would see an end to it. She called the helpline and informed them and the helpline people in turn called up her brother and told him to behave. This, however, was not enough. Meena had to take it up with her parents, who had always advised her to keep quiet to keep the family’s honor. And this will never stop amazing me! No honor gets violated if the abuser abuses. It only gets violated when the abused raises a voice! Meena asked her parents to intervene. She now said she was determined to see the end of it and will definitely call the police.
The Breakthrough workers, including the District Lead, also spoke to the brother. With the multi-sided efforts from all angles, Meena’s parents also spoke to the brother. Meena happily informed us that, although he still creates an environment of tension from time to time, since December there has been no incident of physical violence at her home. She also added that when her mother once told her younger sister, “If you behave like this, I will beat you!”, Meena intervened. She said to her mother, “Let us not even talk about physical violence.” Meena works as a teacher in the local primary school since she passed her 10th and she is a much loved teacher. This helped her complete her own 12th. She loves biology and wants to pursue nursing, but it is almost impossible in the want of money. However, her smile belies her troubles!
We sat in an open place wearing masks in the village of Rambakhs Kheda with a small group of 17 to 25 year olds, who take up issues around gender norms in their villages. Many of them talked about their stories of intervention during sexual harassment on streets. Nilesh told us how he had intervened when a group of boys sitting on a culvert were harassing a girl. How he made sure he engaged with them and did not back down when the harassers asked the age old question, “What is it to you?” He said, “I feel bad! I do not like it!” He could make them see reason and the boys dispersed.

Rambakhs Kheda is an interestingly located village. It is just 27 km away from Lucknow, the state capital of Uttar Pradesh and the nearest motorable way is more than 6 km away. It is a place from which people can get three-wheeler auto rickshaws. The bus stop is 16 km away. It was unnerving to come through the completely deserted stretches where massive construction sites are spread throughout for the Purvanchal Highway. You literally enter mounds of earth piled on either side and somehow navigate through sand carrying trucks and undulating terrain. I mentioned to my colleague, “If they kill and bury us here, no one will even know!” 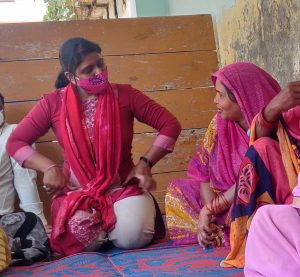 It is from this village that a 17-year-old Nirmala goes to school in her bicycle. One day her bicycle got punctured and she had to return walking from school. She found another girl, who was younger by a year or so, and they decided to walk back together. Boys on motorbikes started chasing them, encircling them, verbally abusing them, made suggestive comments and gestures. The two girls were terribly scared and disturbed. It was difficult to hear her ordeal. It made my heart rate go up and I wanted them to be safe at any cost. It seems Nirmala did not play by the norm of Girls get a bad name if they report such incidences and she reported the incident to some elders as she neared her village. The elders gave the boys a chase but they ran away. The younger girl was so afraid that she refused to walk further to her own village alone. Some older people of Rambakhs Kheda accompanied her to her village. As Nirmala was narrating her ordeal, I was wondering how fragile is the possibility of continuing education for girls from these villages. 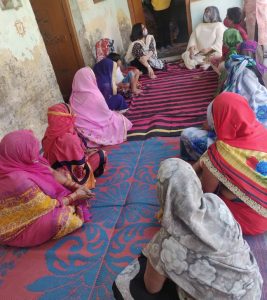 Nirmala told us that her mom has told her not to do such things again and I asked her what is the thing her mother asking her not to do? She was only going to her school. The questioning revealed her mom was worried about her reporting the incident and she was scared that the perpetrators would try to do something later too. We discussed the norm of keeping silent  in the face of harassment in the society and whether it really helps, as we discussed a number of issues in which they had intervened and they violence has stopped. They told us emphatically that as they now know their rights and learnt skills of intervention, they would not be silent anymore!

The adolescents made space for the mothers to come in and talk to us later in the day. I asked the mothers, “Do you think it is okay for girls to travel so much?” They unanimously said, “Oh yes!” and they also told us how they want the village to produce many like Meera, the young leader from the village. And marriage? What about marriage? Suneeta said, “Apne pairo par khadi ho gayi tab nahi karna chahe to nahi karegi (If she stands on her own feet, and does not want to marry, I will support her).” And then she added smiling, “Shadi me kya hai na Didi, kaam bahut badh jaata hai! (There is too much work anyway, when you are married off!)” All the women joined her laughing!

Nayana Chowdhury
Nayana leads the Programs at Breakthrough. She comes with over two decades of experience in the development sector. She has a Master’s in Social Work from University of Delhi and has worked on rights of Dalits and Tribes in the grassroots in India. Nayana is a passionate gender rights worker who has had the opportunity of working with reputed philanthropies such as IKEA Foundation and Tata Trusts as Grant Manager overseeing multi-state/multi-country grants. She has developed, implemented, managed, monitored, and evaluated programs with focus on marginalised groups in Asia and Africa. She has also been a trainer-facilitator focussing on human rights in an international human rights’ organisation. She has always pushed the boundaries of her formal job-description and walked the extra mile to get most out of each development intervention that she has led.
Subscribe.
Receive a bi-monthly update on events, campaigns & other news that interests you.
Categories.
Contribute.Write for us, become a contributor to the Breakthrough blog.
Connect.